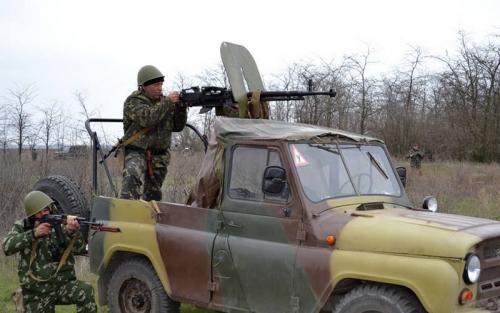 A lot of people want to know how vehicles work in GURPS - most people don't! In fact, there are at least three systems for vehicles and vehicular combat within GURPS, and as far as I can tell the Basic Set one is the least popular. I found that rather upsetting, so I ran a few one shots and campaign sessions using Basic Set vehicle rules and it ended up being a very interesting, fun experience. Very tactical.

And to assist me with that, I made a cheatsheet. It covers basic vehicular rules from Basic Set, as well as ground vehicle specifics. It doesn't cover aerial and water combat fully, but that may change later. For now, consult Basic Set - Campaigns for details.

Using cars in tactical combat, especially in a gunfight, can give PCs needed boost and force multiplier against overwhelming foes, or create a boss-type enemy for modern realistic campaigns.

I urge everyone to review and comment with your suggestions and corrections, as when I made it I felt like I missed something, but then forgot what it is and then successfully used the sheet quite a few times, so it seems that I now need public assistance with correcting it. 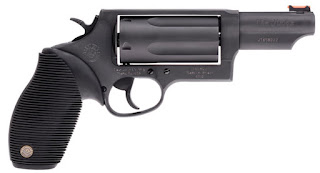 Custom speed-loaders are available at TL8(HT155) and fit all calibers the Judge can fire. 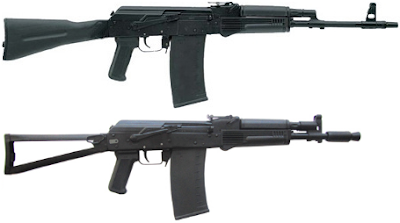 Produced since 1994, Saiga-410K-01 is a civilian variant of AK74M chambered for .410G 3" shotgun shells. Designed for civilian gunowners and legally classified as a shotgun, it's an easy to acquire self-defense and hunting weapon. In countries that restrict rifles, but not shotguns, it can serve as a primary longarm for a party of civilians. Folding stock allows comfortable transportation, while dovetail accessory side-mount allows installation of optical, night and collimating sights. Most accessories designed for AK74M can fit on it.

Saiga-410K-04 is based on AK-105 instead and is slightly handier. Due to Russia's gun laws regarding weapon length, 410K-04 cannot fire with it's stock folded.

Saiga-410K has sound signature of 150 db and can use shotgun suppressors(-2 to hearing).
Made for civilians, it has no bayonet lug and cannot fit grenade launchers designed for the AK family.

It is also possible to modify the 410K-04 variant to fire with stock folded. Use the same rules as for converting the weapon to full auto.

Cinematography. The art of framing events and scenes in an exciting, beautiful fashion.

Cinematic Medicine. Portrayal of medical work in an exciting and beautiful fashion.

It came to me one day that GURPS 4e medicine is boring. There are a dozen ways to lose those virtual hit points, but barely any ways to restore them. All of the medical involves rolling one (or two) skills checks and then waiting, and waiting and waiting...

This absolutely kills any sort of game where violence is the point of the fun, as the party on a bad day may suffer so much damage that, despite winning and surviving, they wont be able to continue the plotline until they spend a month recovering in a high tech clinic. And if there's none, you can shut the game down. It's especially awful if only part of the player team gets messed up - everyone's rushing into action, but Billy Bob can't!

I was utterly baffled that even Action series had no solution to this, so I decided to invent my own. Enter Cinematic Medicine.

This entire system has 3 goals in mind. First, portray cinematic medicine - people recover quickly, in a surprising way, in a dramatic fashion. Second, coat it up with veneer of realism. Third, make playing the group's medic a more exciting and tactical task.

The system is, technically, cinematically realistic. Most of the written concepts have barely any connection to real life, but the system pretends really hard that they do, as should you when you see a group of commandos in the Amazon forest stitching up their bullet wounds, or when an old grizzled vigilante escapes from the hospital after taking a miracle super drug that will hurt him badly, but not before the big bad guy is defeated and the baby is rescued.

The system is suitable for games that follow Basic Set's Heroic Realism, although it might just be one cinematic thing in an otherwise Gritty Realism game. It's main effect is to speed up injury recovery of PCs without affecting their combat survivability too much. Guns still kill, people still drop, and if there is no medicine or no medics nearby, nobody can help you.

Diagnosis (B187) - Skill of identifying various medical issues with the patient. Other medical skills cover most common issues such as flu, heartstop or broken leg. In such cases, diagnosis can serve as complimentary skill (+1 on success, +2 on critical success, -1 on failure, -2 on critical failure). This is in addition to to the effects listed under Diagnosing an illness. Example, success on Diagnosis roll of Common Flu provides Physician+1 to treat it. Critical success provides +2, and any successful treatment is considered Critical Success.

In uncommon cases, Diagnosis is required to do any treatment at all. GM discretion regarding what is considered uncommon.


Fast-Draw (Medical Equipment) (B194) - Quickly draw and prepare medical equipment for use. On Success, If the treatment is under a minute in length, reduce the time needed by 1 second. If the treatment is over a minute, reduce it by 10%. Failure means treatment continues as normal. Critical Failure means you drop the tools, which either means needing to pick them up or to re-sterilize and clean them which takes 1 minute per margin of failure. GM discretion indicates when sterile tools are needed, but usually the answer is always. Using dropped tools without sterilization prompts Infection (B444).

Physician (B213) - Skill of advanced therapeutic medical care, short and long term. Concerns usage of diagnostic tools and drugs that treat complicated illnesses. Mostly concerns treatment of Afflictions. Physician skills includes all the knowledge and abilities of First Aid skills. Any First-Aid Action can be executed by Physician skill instead.

Surgery (B223) - Skill of advanced invasive medical care. Concerns usage of tools, drugs and equipment to directly manipulate internal organs in order to repair them. Mostly concerns treatment of crippling.

Soldier (B221) - Skill of basic military training. Concerns usage of tools that a soldier is familiar with but does not have the training in the tool's main skill. Mostly concerns the use of injectors.

Based on the above, virtually any injury can be healed within a day of intense work by medical professionals. Because of that, cinematic hospital stay is often extremely short and most of it is due to medical professionals wanting to make sure the condition does not return and complications wont arise. A patient may choose to escape from a hospital if he does not want to wait for the entire duration of treatment (usually 1 week), which usually carries no penalties beyond anger of the medics.

In case of insurance, paid medicine or psychiatric help, escaping from the medics may cause them to pursue you in order to make you pay your bills or continue treatment. May involve automatic weapons.

If the GM believes that a specific condition or injury needs an extended stay to actually heal, he sets the length of time needed to cure the affliction and the date of check out at his discretion.

Differential Diagnostics and Treating An Illness.

The team returns to Dr. Shed with test results and they run another differential, combining test result bonuses with new theories (Physician/diagnosis rolls).

Dr. Shed shuts them all up and stares off into the distance as he makes his Physician/Diagnosis roll. He succeeds, prescribes treatment and orders his team to deliver it.

On Critical Success, the treatment is extremely effective, but unconventional, so ever-present Dean of Medicine Dr. Muddy is objecting. Now the team has to somehow bypass this obstacle.
at March 27, 2020 1 comment:

Top - KSG
Bottom - KSG25
My take on the famous shotguns.


More to the point, I wanted [KAC M4A1K] to be in there because it shows what customisation can do, and what that means in the game -- mounting a short suppressor to deal with excessive muzzle blast, grinding off anything that might prevent emergency egress from a vehicle, etc.

Finally, while historically only 20 were made for the 160th SOAR, nobody prevents you from ordering more from KAC -- they are a reasonably small outfit to cater to individual requests of that kind. Hell, using Armoury (Small Arms) or the help of a gunsmith, you could even apply the same process to some other weapon, be it of the AR-15 type or even a completely different weapon.

It always bothered me how Mk18 is just a worse M4A1 as portrayed in GURPS, and it's main use as suppressed SOF weapon is unfeasible. This article will introduce house rules to mitigate such issues.

Tactical Carbine - any assault or battle rifle which has a barrel shorter than the average member of it's firearm family, by about the length of an average commercial suppressor. This is usually displayed by having bulk value equal to it's longer equivalent, smaller damage die and slight reduction in weight.

When mounting a suppressor, muzzle break or any other device that makes the bulk of a firearm worse by -1 on Tactical Carbine, ignore the bulk change. If devices reduce the bulk by -2 or more, ignore -1 of it.

Most firearms can receive such upgrade. This requires 2 days of work and 2 Armoury (Small Arms) rolls.

Multiply weapon's damage and range by 0.85. Reduce weapon's weight by 0.5 lbs. Do NOT reduce it's acc or bulk statistic.

For shotguns and other non-rifled weapons, simply reduce weight.

Most integrally suppressed weapons also have such upgrade.
at March 19, 2020 No comments: 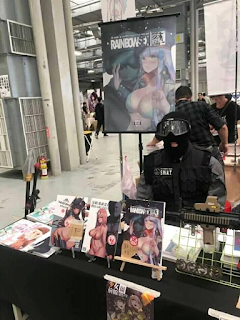 
- 9x39 AS VAL may seem like a bad weapon, but it's subsonic and APHC for 'free'. If you reverse the formula to achieve an FMJ Supersonic round, it has solid 5d pi damage - highly theoretical mind you. SR-3, AS VAL variant without suppressor, would have Bulk -4, Acc 4, 3d(2) pi- or 5d pi damage.

- 9x21 SR-1 Gyurza fires APHC bullet by default with damage dice resembling that of a 9x19 pistol. APHC bullets for 9x19 are extremely rare IRL, except in Russia where such option exists and was developed alongside 9x21. Regardless, if we assume that 9x21 is APHC by default, then it costs $0.4 per APHC shot. FMJ shot in that case costs only $0.2. With an extremely low price of gun and ammo, it is a serious sidearm option.

- Five-seveN in High Tech erroneously lists it as firing "same APHC ammo as P90". P90 entry states that it's bullet is AP, and repeats such statement two times, listing both FMJ stats, AP stats and AP stats fired out of a civilian gun. Converting the 5.7 damage dice of 2d+2 (2) pi- back to FMJ from AP, we get 4d-1 pi- bullet. Combining that with APHC bullet, we get 4d-1 (2) pi-, damage equal to that of MP7. Similar execution can happen to P90, whose FMJ shot would do 4d pi-. I think that makes both guns extremely viable.

- Tactical Shooting permits most guns to be converted to curious ammo types, including 12G to 10G, 9x19 to .40 S&W, .40 S&W to 10mm Auto etc. Most of the curious conversions are blocked by maximum increase of x1.2, but with certain persuasion you can have your GM allow you to convert an M16 to 6.8 Barret for that speed 6d-1 damage (G3A3 and such should work without GM fiat), or 7.62x51 battle rifles to .300 Remington Ultra Magnum (Dmg 9d+1 with no rcl increase!)

GURPS Basic Set Vehicular Combat Cheatsheet A lot of people want to know how vehicles work in GURPS - most people don't! In fact...